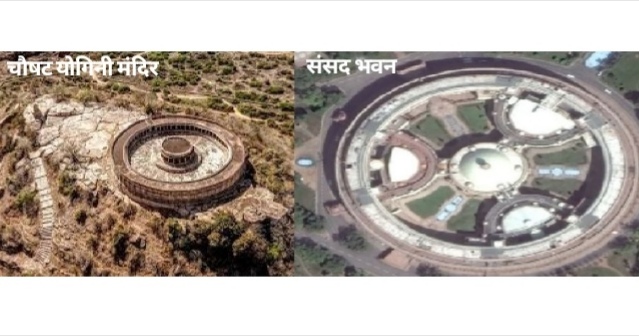 Contents hide
1 Who is Yogini’s
2 What is Yogini Temple
3 History
4 Why was the name of the temple named Chaushat Yogini
5 Other Yogini Temples
6 What is special?

The temple of Chauhaath Yogini (which resembles the Parliament building itself), also known as Ektto Mahadev Temple, is an 11th Century temple located in the Murena district of the Indian state of Madhya Pradesh. It is one of the elite temples of the country which is in good condition. The temple is made of a circular wall, which has 64 rooms and there is a pavilion in the middle center, which is separate from a courtyard, which is circular in shape, where Lord Shiva has been restored. This temple has been declared an ancient historical monument by the Archaeological Survey of India.

What is Yogini Temple

A lot of pictures in the Hirapura Yogini temple show the ladies in different postures. Some dance, some people with bow and trident, while making some music, drinking some alcohol, and sharing some household chores. Most women are dressed up with fine hairstyles. Others have a snake, or bear, or a lion, or elephant head. They are standing on camels, human heads, male bodies, crows, roasters, peacocks, bulls, buffaloes, asses, swine, scorpions, crabs. No such thing has been found in the Murena temple. Maybe with the time, they have been removed from the temple.

According to an inscription, the temple was constructed in 1323 AD by Kuchpaghat King Devpal. It is said that the temple was the place to provide education in astrology and mathematics on the basis of the Sun’s transit.

Why was the name of the temple named Chaushat Yogini

Why only sixty-nine? There is no clear answer to this. It may be that it refers to the sixty-four arts, or the sixty-four apsarao (Apsara is the most beautiful divine woman in God’s land. Thye live with God not with humans). It is possible that the meaning is very much cryptic, mentioning eight divisions of time which make up one or eight directions or box of the chess board

However, the Jyottar Yogini temple has been destroyed but some are still left. There are two in Odisha, Bhubaneswar
near Bolpur in and Hirapur near Ranipur. In Madhya Pradesh, there are three non-secricular ruins Bhedaghat near Jabalpur, in Mithauli in Murena district,  and in Khajuraho.

Some historical records mention that there is a temple based on the design of Mithawali (Mithauli) in Murena district of Madhya Pradesh. This temple is known as Chauesta Yogini Temple, the chaucer word refers to 64 temples within a large circular temple. The temple was constructed in the 8th century. It is located in Seismic Zone III.

I hope you read something new today. Share your views in the comments section below.

Be sure to join the tathastuu email newsletter to read amazing ancient history and mythology related articles.

If you find this article informative, do share it with your friends!

1 thought on “Do you know? Indian parliament followed which Indian temple design”

You have successfully subscribed to the newsletter

There was an error while trying to send your request. Please try again.